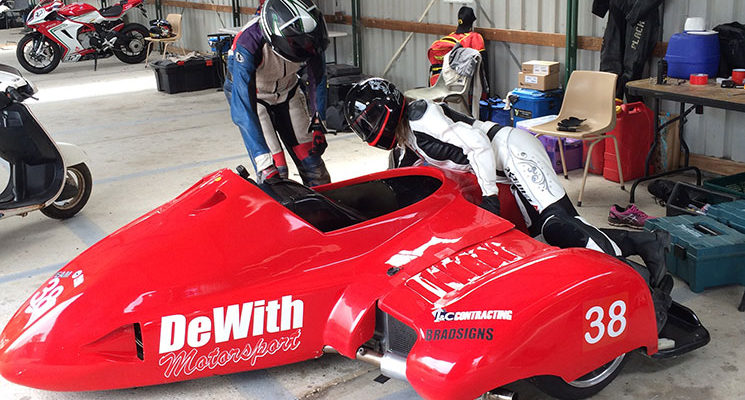 The last time I rode a motorcycle on a race track was 2008, that’s 7 years and way too long!! A post came up just before Christmas on the Melbourne Cafe Racers Facebook page, offering a free spot at a VVRA track day at Broadford, due to a last minute cancellation. I thought “what have I got lose” so I snapped it up. The night before I had to make a special trip to my grandmas to dig my old 1999, white, leather, zip together suit out of the storage cupboard in her garage. Definitely time for an upgrade! With no access to a trailer, I rode my bike out to the track early that morning. It was a little over an hour from home, and was good opportunity to get me psyched and in tune with the bike for the day.

I arrived as the rider briefing was starting. Having done track days in the past the girls signing us in suggested I avoid the beginners group (which was a good call looking back). I was a little nervous not having ridden at Broadford before and never riding in the intermediate group. I had always put myself in the slowest group in years gone by. I have in the past done a few California Superbike Schools with the legend himself, Steve Brouggy and was rapidly trying to recall all of the pointers and tips that I had retained from them as we lined up to get onto the track.

The mix of bikes was fantastic! From old school Fireblades and GSXR’s to an immaculate ZXR 1200, a variety of cafe racers a BMW GS 1200 and an S1000RR, just to name a few. You get the idea.

My first session I took it easy. Getting a feel for the track and how my bike was taking to it. Each lap I opened up the throttle a little more and jumped on the brakes a little later and harder. The corners were the most nerve racking and exciting. I was completely confident in my rubber but my suspension was letting me down. My bike would wallow through every corner. Because it felt unstable and rather unnerving, I was reluctant to shift my weight off the seat, which had me scraping my foot pegs instead of my knees.

It was so fun ripping up the inside and outside of a few of the old boys, including Mr BMW GS 1200 through the corners, the tyres handled really well.

I ran most of the track in 2nd and 3rd gears through the tighter parts, opening her up a little more on the straights, but didn’t get past 4th gear all day.
The braking has vastly improved since changing the tyres. Thruxton’s aren’t known for their brakes or suspension but I can feel a significant improvement with the tyres having much better grip helping the bike to pull up.

I have decided that I am definitely not taking my bike onto a track again until I upgrade the rear shocks and front springs at least.

Overall I felt that I got a great even wear on the tyres over the 3 sessions. I pushed hardest in my 2nd session and the tyres didn’t skip a beat.

When I pulled into the garage I gave them a good once over and there were no missing chunks, just perfectly worn, balling beauties and I even got my chicken strips down to about 12mm, a fair effort for this rusty girl. As exhilarating as it was riding the track, the highlight of the day for me was riding as a passenger with Chrissy Clancy in a side car. I did 3 laps with the only Australian woman to race sidecars at the IOM TT last year and I couldn’t wipe the smile off my face!

I am saving like crazy for my new shocks so that I can get out there again! It was an awesome, fun filled day and I can’t wait to do it all again soon!!